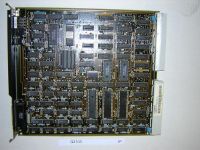 The function of the IP (Interface Processor) is to control the message exchange in the Hicom system between the switching unit and the servers.

The front panel of the board contains a 7-segment display, a RUN-LED, a reset key, a monitor key and a V.24 interface.